It’s over for now, this wackadoo April trade deadline. The usual swapping to prepare and restock for the playoffs had an added wrinkle as the league transitions to its new Nine Nations of North America alignment next year.

For future Conference III teams, that meant excising players not suitable or willing to enter the not-technically-approved-by-OSHA steel furnace that is Conference III and adding guaranteed future heroes to the rosters.

Martin Erat and his unwitting accomplice after the fact Michael Latta: Long-time Predator Erat asked for a trade to a Cup contender and waived his no-trade clause to go to the Caps, who aren’t exactly no-doubters for the playoffs. David Poile didn’t seem thrilled by Erat’s request and frankly — since the Caps had to give up top Swede and future Conference III hero Filip Forsberg to get Erat — neither are Caps fans. Marty is a notorious purveyor of the spin move, making him perfect for Washington (aye oh!), but clearly ill-suited for Conference III. Latta is a big body who scored a lot of goals in the A, but he isn’t all that great, but he did have a moment of whatever the opposite of l’esprit d’escalier is. Though he sounds like a cartoon rodent villain, Erat is the Number One Fraidy Cat.

Wade Redden: Kudos to Wade Redden for playing for as many NHL teams in the last three months as h

e had in the previous 17 years and two more teams than he had in the two seasons immediately preceding. Anyway, Redden gets out of St. Louis to go to Boston where he will hopefully be hilariously paired with Zdeno Chara. Redden is simply a Really Old Fraidy Cat Who Keeps Walking Around The Neighborhood Because People Keep Feeding Him And He’s Kind Of Funny So Whatever.

Scott Hannan: The Predators’ Big Free Agent Signing gets dealt back to San Jose for a conditional. Perhaps the Sharks needed someone to replace the perpetual liability on the blue line they lost when Doug Murray’s Giant Booty went to Pittsburgh or perhaps they missed Hannan’s unique ability to push an opponent and then push him a second time. Hannan likes to surf and perhaps he was disappointed that, besides Jason & The Scorchers singing about the Dirt Coast in “Greetings from Nashville” and an ocean of doubt in “Ocean of Doubt,” there is no surfing in Nashville. Hannan is Geographically Challenged Fraidy Cat.

Rob Flick: Someone in Chicago’s system whose name sounds made up. Witness Protection Fraidy Cat.

Phillipe Paradis: This European EDM DJ will now spin records in Tampa where they like that kind of thing, probably. Techno Fraidy Cat.

Dallas’ Entire Forward Corps: A whole mess of dudes from Dallas wisely departed Conference III. Jagr did so before his old-people insurance company realized the future risk involved with putting an elderly man into what is basically going to be an 82-night lumberjacks-in-the-roadhouse brawl. Can’t blame Jagr for going to Boston; it’s a much safer location for him and his low-co-pay Medicare top-up plan. As for Derek Roy (Vancouver) and Brenden Morrow (Pittsburgh), we must assume they are just straight up terrified of the unknown. Staring Into The Abyss Fraidy Cats.

Jarome Iginla: Anybody would be happy to have him. He was so scared, he took a non-stop flight from Calgary to Pittsburgh. Wouldn’t even take a layover in Conference III in his terror. Flyover Fraidy Cat. [UPDATED 7:45: Apparently, Iggy did have a layover in Chicago, but he didn’t have to wait around because the Pens flew him on their private jet. I bet that fraidy cat didn’t even leave the airport. What a fraidy cat.]

Filip Forsberg: The return piece in the Erat trade, Forsberg has been honing his skills in Sweden, which is more or less like learning how to play hockey at the place where ice is birthed from the earth like Athena from the head of Zues. Hero.

Tomas Vincour and Cameron Gaunce: A special kind of hero. While his Dallas teammates were going to the Rust Division or Ectopia or Floricanada, Vincour – Belgium’s Famous Painter — opted to stay in Conference III with a move to Colorado. And 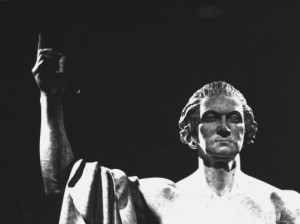 because he’s a real Hero, he allowed fellow Hero Gaunce to stay in Conference III where he belongs.

Michal Handzus: He returns to the place of his greatest glory — those eight games he played with the Blackhawks in 2007. Hero.

Jason Pominville: Another prime top-level hero, Bring It On In To Pominville was given a choice of pretty much anywhere in the league and he chose Minnesota. Sure, the Wild look terrifying for years to come, but given the full-on explosion in Buffalo, it would have been easy for Pomy to pick a more comfortable destination. He didn’t. Pominville, Population: Hero.

Jay Bouwmeester: J-Bo, searching for that playoff series, lands in the Lou (or the loo for our English readers; same thing). Another guy who could have gone the easy way, landed in a soft spot with a guarantee of playoffs from now until the end of Alexei Yashin’s cap hit. The easy way is not the way of the Hero.

Jeff Deslauriers: Dude wanted to be in Conference III so badly the Ducks just said “Go, we’ll figure something out with Minnesota later.” Hero.