It’s five past 5 across Conference III (leave work early, Winnipeg as you are the only ones working), time to hit bricks and get that freakin’ weekend extra-started, am I right? 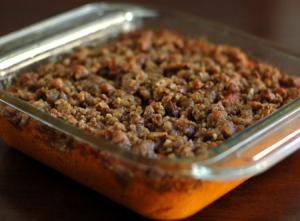 What We’re Eating: Like I suspect many of you, our refrigerator is action-packed with boatloads of Thanksgiving leftovers. Two kinds of turkey, ham, cranberry relish (which my grandmother assures me will “keep forever,” which is good because that’s how long it will be in the fridge), cornbread dressing and a few slices of my nearly not-quite world famous cayenne pumpkin pie.

Both my mom and grandmother made sweet potato casserole, my grandmother’s recipe. It’s sweet potato, brown sugar, butter and ground pecans. It hardly qualifies as a vegetable (or a starch, scolds). It’s basically dessert that comes before the pie.

In any event, it’s pretty great as a leftover. It firms up a little. The sugar gets caramelly or whatever. I’m not a doctor.

What We’re Drinking: Last night’s Turpucken was, frankly, pretty boring. But, as frequently happens with holidays, I forgot what day of the week it was. Being Thursday, it was technically a college night at Bridgestone Arena, which meant the standard-level draft beers were half-off ($4.50 for most, $4 for season ticket holders). I’ve extolled the virtue of Hap & Harry’s in this situation, but previously Bridgestone just had the lager. H&H has an ale now and that was the perfect choice for a day that started out 13 degrees in Nashville.

Only problem: it was Thanksgiving and that second Hap & Harry’s hit me like a ton of bricks. Given the loss, maybe it wasn’t a problem after all.

Chicago: Cats may have nine lives, but Washington, Ill.’s Dexter the dog has, like, a zillion.

Your Weekend Jam: “Do The Dog” by The Specials

Colorado: If supply and demand is really the law, “Colorado dentist” looks like a real lucrative career choice.

Dallas: I don’t know what the Fossil Rim Wildlife Center is because it wasn’t included in the Horton Numbers review, but whatever it is, it has baby cheetahs.

Your Weekend Jam: “Lovecats” by The Cure

Minnesota: Is Parise or isn’t he? He’s visualizing. If a healthy Zach is your Christmas wish, go to Oakdale and visit a Santa with a doctorate in SantaClausology.

Your Weekend Jam: “Santa Has A Mullet” by Nerf Herder

Nashville: While you’re mulling Shea Weber’s eye injury, turn your frown upside down with a good, bracing run. Or watch people running. It was for a good cause.

Winnipeg: Hope you enjoyed the hooky game. If you parked your car on a snow route, it’s either been towed or stolen and it’s in Komarno.

Your Weekend Jam: “Somebody Stole My Car” by The Kinks