END_OF_DOCUMENT_TOKEN_TO_BE_REPLACED

“Happy Festivus!”
“George, this is a surprise; who’s the suit?”

We asked, you answered and the submissions are in.

Have you seen the pole, Kruger?

END_OF_DOCUMENT_TOKEN_TO_BE_REPLACED 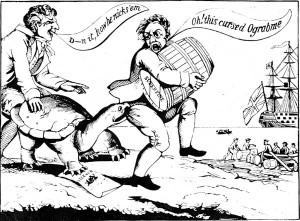 Thomas Jefferson signed the Embargo Act of 1807 just in time for Christmas.

The act — a response to harassment and impressment of U.S. merchant ships by the British and French — banned U.S. ships from sailing for foreign ports, essentially banning all foreign trade.

It was a disaster and like Prohibition later, was widely ignored and smuggling was rampant.

Though in effect for two years, it simply delayed, rather than  eliminated, the threat of war. The U.S. and Britain (not Canada, despite what they tell you) fought the War of 1812 five years after Jefferson’s Embargo.

END_OF_DOCUMENT_TOKEN_TO_BE_REPLACED

Snow White and the Seven Dwarfs debuted on this day in 1937— and you know we love our dwarfs, especially Grumpy, but not Dustin Brown.

It being the holiday weekend — and with the Festivus project in its final stages (there’s still time to submit!), we’ll do a dwarf-sized preview of today’s games in the interest of time:

END_OF_DOCUMENT_TOKEN_TO_BE_REPLACED

In 1192, Richard The Lionheart is captured and imprisoned by Leopold V of Austria on his way home from the Third Crusade.

Old Leo was something of a jealous guy, you see. When the Crusaders took Acre, Leopold hoisted his banner alongside that of Richard and his pal Phillip II of France. That was a bit of an affront, because Leo was just a vassal (of the Holy Roman Empire), so they ripped his banner down and tossed it in the moat and Leopold left in a huff (seriously, this was a very big deal).

Anywho, Leopold captured Richard on his way home and held him and got excommunicated for his trouble, because capturing a Crusader was a serious violation of The Code, you see.

Eventually, Richard got out when his mother, Eleanor of Aquitaine raised a whole mess of money — and Philip sent a message to Richard’s brother, John (the evil John, from Robin Hood, who’d taken the throne during his brother’s captivity): “Look to yourself; the Devil is loose.”

END_OF_DOCUMENT_TOKEN_TO_BE_REPLACED

This week, we’re freezing for the holidays — including Festivus (and you can help III Communication celebrate!).

END_OF_DOCUMENT_TOKEN_TO_BE_REPLACED

“I know things have been rough between you and your brother, Caracalla, since your dad, Septimius Severus, died and you guys were named dual emperors of the Roman Empire.”

“Well, sure, mom. We wanted to split the empire in two and rule separately, but we couldn’t work it out. Of course, when he tried to have me murdered at Saturnalia, that really put a damper on our brotherly affection.”

“Happy holidays, right? Anyway, Caracalla wants you to come over — without your bodyguards — and see if you guys can’t talk it out.”

And that’s how Geta, the 22-year-old Roman Emperor ended up being murdered by the Praetorian Guard on orders from his brother, December 19, 211.