This week, we got the heavy coats back out.

1. Chicago Blackhawks
2. St. Louis Blues: It was a tough decision between Chicago and St. Louis for this week’s top spot. On one hand, the Hawks passed the Blues in points-per-game, albeit by mere hundredths. On the other St. Louis (still) has the Belt and is 13-0-1 against the rest of Conference III. But St. Louis has lost four of six. But Chicago lost to Detroit Wednesday, which is unacceptable. Edge to the ‘Hawks, though, because of that recent Blues slump. 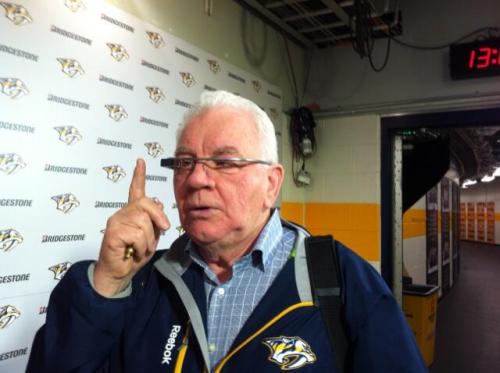 4. Colorado Avalanche: If you thought Colorado was ever going to slow down, watch out: Alex Tanguay is coming back, you guys!

5. Alberta Clippers: No, not an expansion team for…whatever the third-largest city in Alberta is (apparently Red Deer, which is roughly the size of Tyler, Texas, which isn’t even one of the places we considered relocating the Wild). We’re talking about the weather system, a brutal cold front that sweeps down from the Prairie Provinces (there are variants, such as the Saskatchewan Steamer and Manitoba Mauler) and makes Nashville the same temperature as Casper, Wyoming.

6. Minnesota Wild: Currently wearing the Crown of Fecal Matter, the Wild are hoping they’ve emerged from the depths of Jonas Brodin’s sophomore slump.

7. Supertramp: I love Supertramp, so imagine my dismay when I learned they had a hand in 9/11, according to a crazy person:

Forum member ‘Eve’ posted the pic along with the following cryptic description:

“9/11 was served with breakfast…not to mention the everyday fight for freedom: “Breakfast In America.”

‘Eve’ appears to be convinced and continues:

“You are looking out of the window of a plane, she is showing the target.”

Here’s something bizarre (and real): do a YouTube search for “Supertramp” or any Supertramp song. All of the videos are labeled similarly to the one above. Something like “[Song title] by Roger Hodgson, singer/songwriter of Supertramp with…” I don’t know if ol’ Rog is on a copyright vendetta against his bandmates or what, but it’s very strange indeed.

Got some out-of-control honeysuckle or kudzu that just won’t go away?

Goat Guys and their herd of grazing animals are here to help with Middle Tennessee’s worst pest plant problems.

“The good thing about using goats and sheep is that they are a very green and a sustainable way to take care of these things. They are eco-friendly in that you can take care of this unwanted vegetation without the use of poisons or chemicals. It’s a whole natural system,” said Josh Delozier, co-owner of Goat Guys along with David Daily.

The two business partners had talked about the plan for a while before starting the Franklin-based service this winter. It’s an affiliate of a similar “hire-a-herd” group, Rent-A-Ruminant out of Seattle.

9. Nashville Predators: After winning The Chambers Pot and shedding the Crown of Fecal Matter, the Predators are winners of three of their last four heading into the Circus Road Trip across Western Canada (and also Winnipeg).

10. Dallas Stars: Ahead of the Preds on points, but having recently lost to Nashville (and pretty much everybody else), Dallas slips from their usual spot at No. 8.

11. Winnipeg Jets: Don’t look now, but the Jets head to the west coast hot as a firecracker.

12. “Vicious Vices”: Scope this picture of reasons for admission to West Virginia’s Trans-Allegheny Lunatic Asylum from the late 19th century —

13. Antoine Roussel: Even a Threero can have a face that serves as the perfect valediction for a guy heading to the Stupid Ugly Dumb Metro: