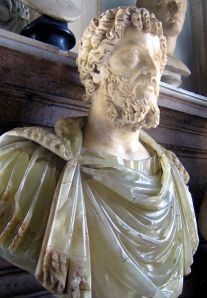 Roman Emperor Septimius Severus dies on this day in 211.

Having traveled to Britain in an effort to conquer the Caledonians in 208, Severus and his army had pushed far into what is now Scotland before the native Caledonians revolted and, boy, did that tick off the emperor:

Alas, Severus fell ill in the midst of the long campaign and retired to Eboracum (now York), where he died, telling his sons:

“Be harmonious, enrich the soldiers, and scorn all other men”

Historical Context: Colorado has had surprising success on this season’s campaign and great success of late. Now they, like Severus, head to York (New, not Old). After Severus retreated, his sons were never able to match his level of success. The Avs would like to avoid that fate.

Last Time They Met: Dustin Byfuglien won it for the Jets in OT 4-3 back in April.

Historical Context: Severus was the last of the men who ruled in the Year of the Five Emperors. Rome reeled, with emperors murderers (one was executed because he bought the imperium at an auction), but capable Severus returned from leading legions, seized power and the Empire was solidified again. Sometimes, as the Jets are apparently learning, it just takes time and struggle to find the right guy.

Last Time They Met: Cody Ceci notched the game-winner for Ottawa in a 3-2 OT win Dec. 16.

Historical Context: Despite being a pretty alright emperor (and certainly better than the guy who bought it on eBay), Severus and the Senate didn’t get along. The latter hated the former for using the military to take power and the former hated the latter because they hated him. To show his disapproval, he regularly executed Senators. So. Go Blues?

Last Time They Met: Steven Stamkos got the winner for the Lightning on in a 3-1 Oct. 16 Tampa victory.

Historical Context: Before the ultimate failure (or at least, ultimate maintenance of the status quo ante) in Britain, Severus had great success in Africa, securing the continent which was the breadbasket of the empire. The Wild are coming off a trip in which they got an overtime point against San Jose and a huge win over Anaheim…before coughing it up against Calgary and Colorado. Can they secure their legacy (and their playoff position) before the break?

Historical Context: Dallas and Phoenix are battling for that last Western Conference playoff spot. Severus’ death set up a battle between his sons Caracalla and Geta. And we know how that turned out.