Obscene Alex and J.R. went five for eight in Round 1. It almost has to improve in Round 2! Series previews for Hawks/Wild will be up whatever day that begins (Friday?).

END_OF_DOCUMENT_TOKEN_TO_BE_REPLACED

Obscene Alex and J.R. can’t agree on the utility of explicit language; can they agree on the outcome of this year’s playoff series?

END_OF_DOCUMENT_TOKEN_TO_BE_REPLACED

Five seasons.  That’s how long the Stars left fans in the lurch between playoff appearances.  Only Trevor Daley remains from that 2007-08 team that brought Dallas to the Western Conference Finals, upsetting the Mighty [Naughty Times] of Anaheim and San Jose [Accidents] before losing 4-2 to the Dead Things.  The turnover was severe as the Stars retooled and rebuilt and looking back at it, even though I watched it all happen, it is truly amazing how many changes this team has seen.

The deep pockets of Tom Hicks brought Dallas a Stanley Cup in 1999, but a series of poor financial decisions outside of the team dragged the Stars down with him.  The Stars subsisted on boiled shoe leather from 2009 through the beginning of the 2011-12 season and at least part of that time had creditors and the NHL managing the team’s finances.

Les Jackson’s face says it all.

Doug “I’ll give you a 1st for Ladislav Nagy” Armstrong was canned at the beginning of 2007-08 when the team got off to a bad start.  From there, the two-headed monster of Les Jackson and Brett Hull reigned for a little over a season, most notably adding Brad Richards and totally useless [crap cranium] Sean Avery on Hull’s decision.

After missing the playoffs for the first time since 2002, Joe Nieuwendyk was brought in as GM and did many things right.  He restocked the Stars’ bare prospect cupboard, making it one of the best in the NHL in a very short timeframe.  He iced a decent team on a shoestring budget.  To the frustration of some fans, he even fired Dave Tippett as he attempted to aim the team towards a fast, puck possession style of play and kept Brad Richards, who also had a no trade clause, for a failed playoff push when it was clear Richards wouldn’t re-sign in the offseason due to frustrations over the team’s financial situation.  However, his inabilities to find adequate coaching, align team management in Dallas, and fully develop the Stars’ on-ice identity as well as Jim Nill being seen as a better option by new owner Tom Gaglardi were his real undoing.

As the first coaching hire after Tippett, Marc Crawford relied heavily on two lines and completely lost the room at the end.  Glen Gulutzan was brought up from the Texas Stars as a replacement.  Despite his ability to mentor young players, Gulutzan was too green to be an NHL head coach and something went completely [tuckus] over teakettle between Nieuwendyk and Gulutzan when Reilly Smith burned through the first year of his entry level contract at the end of 2011-12, getting scratched and barely seeing any ice time when he played.

No facet of the organization was immune to change.  Even my ticket sales rep left during the lockout.  More importantly, though, from the 2007-08 season to now, the player turnover has been astounding:

What did we do to the hockey gods to deserve this [gentleman]?

(About 14 NHL-caliber players, although some of them barely so, 8 European league/KHL players, and 11 AHLers) 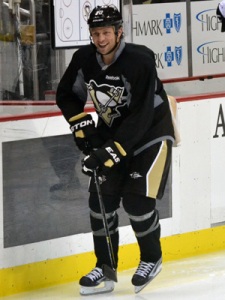 Now granted, 32 of the players above were players who briefly saw NHL action before falling back down into the AHL, Europe, or the KHL, but this is still a hell of a lot of turnover.  42 NHL players.  Enough to ice two NHL teams with two healthy scratches for good measure.  Is that number a sign?  Also, here’s a hilarious bit of trivia – Ivan Vishnevskiy, once heralded in Dallas as the second coming of Sergei Zubov, was the main piece headed to the Atlanta Thrashers to bring Kari Lehtonen to Dallas.  Later that season, the Thrashers realized they made a horrible mistake and flipped him to the Butthawks for Andrew Ladd.  Oops.

In the end, though, all that misery was worth it.  The Stars have new owner Tom Gaglardi and with him came a new, savvy GM in Jim Nill.  Nill recognized what many fans didn’t and hired Lindy Ruff, who has turned out to be a great coach instead of the past-his-prime dinosaur fans feared.  Nill also took a smart gamble, did his due diligence and drafted Valeri Nichushkin, a player Joe Nieuwendyk wouldn’t have touched with a ten foot pole. Nill recognized a prospect pool full of good players, but no blue chip skaters, and risked a late first round pick on Jason Dickinson, a player that showed strong upside if he could fit all the pieces together.  He snagged a goaltender, Philippe Desrosiers, that is tearing up the QMJHL.  Most importantly for the present, he traded Loui Eriksson, Reilly Smith, and Matt Fraser for Tyler Seguin and Raptor Jesus a few days after the draft. He also added other complimentary pieces to fill out a roster mixed with youth and veteran leaders on short term deals to guide them.

Gaglardi rebranded the Stars off the ice by bringing Jim Lites and Mike Modano back into the fold and introducing new uniforms.  Jim Nill and Lindy Ruff have rebranded them on the ice into the fast, puck possession team Joe Nieuwendyk was aiming for but never quite reached.  Jamie Benn has grown into his role as captain and with a monster season, has led by example.

This season has seen ups and downs.  Winning streaks and losing streaks.  Times when fans have literally cried for joy and times when they’ve wanted to reach into their televisions and strangle the [snot] out of certain players.  Stepping back though, Stars fans know this team is just beginning to come together.  More pieces will be added and subtracted before they’re a true contender.

Paul Bissonnette is looking for his ball.

Back in September, most experts picked Dallas to finish outside the playoffs for a sixth season in a row.  Many fans, including myself, expected the same – a rebuilding year.  Instead, the Phoenix Coyotes now find themselves playing golf after the Stars triumphantly stomped all over the Blues this past Friday.  Hockey fans everywhere should thank Dallas for ensuring nobody had to watch the Coyotes stumble and trap their way through the first round.

Mickey heard the Stars were coming to town.

Now, the Stars ironically find themselves facing Stephane Robidas, who was traded to a contender at his request at the deadline, and that Mickey Mouse organization in Anaheim.  After all the seasons of selfless effort where Robidas was one of the heart and soul players on the Stars – the countless times he broke his nose, all the times he got crushed by a hit and popped right back up, and the one time he couldn’t get back up this season – I truly wish him the best, but not at the Stars’ expense.  No, I want to see Dallas crush the hopes of Anaheim and the aspirations of the second California team they face in the next round again, just like in 2008 and as one final round of retribution for lumping the Stars in with a bunch of west coast teams for so many years… but if they don’t, I’m still happy because everything the Stars do from here is just icing.  You see, the Stars have exceeded everyone’s expectations.  They have nothing to lose and that’s what makes them dangerous.

Pass those boys some shells – it’s duck season.  Stars in 7.

On April 9, 1388, forces of the Old Swiss Confederation defeated those of the Habsburgian Archduchy of Austria at the Battle of Näfels.

In the spring of 1387, the Canton of Glarus destroyed a Habsburg-held town and then declared themselves free of the control of the be-jawed nobles.

The next year, the Austrians attacked in an attempt to cut Glarus off from their Swiss Eidgenossen. A combined force of 6,500 attacked the garrison at Näfels, defended by just 400.

And wouldn’t ya know it — the Swiss won.

END_OF_DOCUMENT_TOKEN_TO_BE_REPLACED

Greetings, [confrères], and welcome to another week of [Redacted].  I’m going to pretend most of this past week never happened. Start over.  Press the reset button.  Rage quit.  Maybe even black out to forget.  Instead of revisiting the past week, we’re going to spend this week looking ahead.  The future hasn’t happened yet (something Boring Sean Monahan may have already said at some point) and therefore offers me the hope missing from the past week.  Let’s get this over with…

END_OF_DOCUMENT_TOKEN_TO_BE_REPLACED

The government of France abandons Paris on March 18, 1871, marking the beginning of the rule of the Paris Commune.

Adolphe Thiers, president of the Republic, ordered the retreat to Versailles of the 40,000 troops of the regular army in Paris. With that, the National Guard, the army of the Commune, took over government offices and gunpowder stores (they also killed two generals, which sparked the armed conflict earlier in the day).

And for the next two months or so, Paris would be ruled by a revolutionary government of varying degrees of socialism.

END_OF_DOCUMENT_TOKEN_TO_BE_REPLACED

Every Friday [Ed note: I’m an idiot] bloggers from around The Heptarchy will update us on the news and notes from their teams (with that fancy header image courtesy of Mike D; like democracy itself, it’s a perpetual work-in-progress). Yes, we ripped this off from TRH’s Pacific War Room; no, we don’t care. And since we ripped it off, we’ll follow their lead and go in standings order.

END_OF_DOCUMENT_TOKEN_TO_BE_REPLACED

Greetings, [fellow travelers], and welcome to a special trade deadline edition of [Redacted].  Without further ado, let’s have a look at what each Conference III team did over the past few days.

END_OF_DOCUMENT_TOKEN_TO_BE_REPLACED 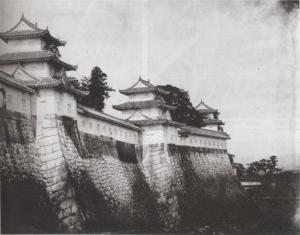 In 1868, pro-Imperial forces capture Osaka Castle from the forces of the Tokugawa shogunate.

The troops within didn’t put up much of a fight, their morale destroyed when their leader Tokugawa Yoshinobu fled in the night ahead of the Imperial siege.

END_OF_DOCUMENT_TOKEN_TO_BE_REPLACED 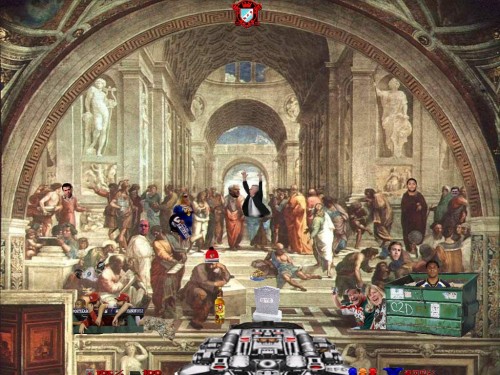 Today, we debut a new weekly feature here at III Communication — DemocraThree. Every Friday, bloggers from around The Heptarchy will update us on the news and notes from their teams (with that fancy header image courtesy of Mike D and like democracy itself, it’s a perpetual work-in-progress). Yes, we ripped this off from TRH’s Pacific War Room; no, we don’t care. And since we ripped it off, we’ll follow their lead and go in standings order.