What is known in English as the Battle of Leipzig — much more poetically, the Germans call it Völkerschlacht and the French Bataille des Nations — begins October 16, 1813 as the forces of the Sixth Coalition meet those of Napoleon near the city in Saxony.

It was to be the largest battle in Europe until World War I with some 600,000 belligerents in the field. On the Coalition side: Russians, Prussians, Austrians and Sweden. For Napoleon, not just French but Saxon, Polish and Italian troops.

Furthermore, each of the Coalition countries had, present in the field, their monarchs: Tsar Alexander I of Russia, Prussia’s Frederick William III and Emperor Francis I of Austria. This led to massive staffs and, one might call them “predictable” petty rivalries within the Coalition itself, already strained upon having lost the contributions of British and Portuguese forces (among others).

Nevertheless, all agreed that Napoleon’s German campaign had to be stopped and Leipzig was where they could make that happen.

END_OF_DOCUMENT_TOKEN_TO_BE_REPLACED 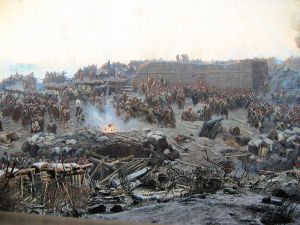 In 1854, the Siege of Sevastopol begins during the Crimean War, as the French sapeurs begin digging trenches around the capital of the Crimea.

After the Allied fleet — which included the British and Ottomans along with the aforementioned French — landed in September with 50,000 men at Eupatoria, the intention was to march to Sevastopol with ease.

It didn’t quite go as planned. The Russians scuttled the fleet and began firing on the assembling Allies. The battle was won by the Allies nearly a year later, but at great cost: 128,000 casualties for the Allies, 102,000 for the Russians, which included civilians, many of whom died of disease in the encircled city.

END_OF_DOCUMENT_TOKEN_TO_BE_REPLACED

Every Friday bloggers from around The Heptarchy will update us on the news and notes from their teams (with that fancy header image courtesy of Mike D; like democracy itself, it’s a perpetual work-in-progress). Yes, we ripped this off from TRH’s Pacific War Room; no, we don’t care. And since we ripped it off, we’ll follow their lead and go in standings order.

END_OF_DOCUMENT_TOKEN_TO_BE_REPLACED

In 1979, Margaret Thatcher — then Leader of the Opposition — puts the motion “That this House has no confidence in Her Majesty’s Government,” at the time led by Prime Minister James Callaghan, a historic dingbat, who led (“led”) Britain through the devastating Winter of Discontent.

The motion carries by one vote, forcing Callaghan to call an election and resulting in 18 years of Conservative government in the UK.

This is all very complicated, but in short, Callaghan had considered calling an election in 1978, but decided to wait a year so the economy would improve. The economy did not improve — it, in fact, fell apart — and then a referendum on devolution in Scotland failed, which angered the Scottish nationalists, which had supported the Labour government and angered the Liberals, which supported devolution and were miffed by the high vote threshold set for passage.

Anyway, everyone was put out with Callaghan and there was a very exciting vote and debate on March 28, 1979.

END_OF_DOCUMENT_TOKEN_TO_BE_REPLACED

On March 22, 1765, King George III gave the Royal Assent to “An act for granting and applying certain stamp duties, and other duties, in the British colonies and plantations in America, towards further defraying the expences of defending, protecting, and securing the same; and for amending such parts of the several acts of parliament relating to the trade and revenues of the said colonies and plantations, as direct the manner of determining and recovering the penalties and forfeitures therein mentioned.”

We just call it the Stamp Act of 1765. It was unpopular among the colonists, who argued they were being taxed without their consent, and instead of raging blindly, they set up committees of correspondence and congresses and you know the rest (“The rest” is “America owns”).

END_OF_DOCUMENT_TOKEN_TO_BE_REPLACED

On March 16, 1916, the 7th and 10th Cavalries under John J. Pershing marched into Mexico in pursuit of revolutionary general Pancho Villa.

END_OF_DOCUMENT_TOKEN_TO_BE_REPLACED

Every Friday bloggers from around The Heptarchy will update us on the news and notes from their teams (with that fancy header image courtesy of Mike D; like democracy itself, it’s a perpetual work-in-progress). Yes, we ripped this off from TRH’s Pacific War Room; no, we don’t care. And since we ripped it off, we’ll follow their lead and go in standings order.

END_OF_DOCUMENT_TOKEN_TO_BE_REPLACED 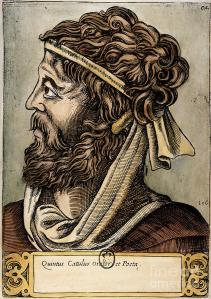 On March 10, 241 BC, Michal Handzus celebrated his ninth birthday.

No wait, that’s not right.

On March 10, 241 BC, the Romans sank the Carthaginian fleet in the Battle of the Aegates Islands, effectively ending the first Punic War.

As the morning arrived, the wind favored the Carthaginians and Hanno the Great (the second of that name) set sail. Despite the conditions, Catulus decided to intercept the Carthaginians and ordered his fleet to prepare for battle, stripping them of masts and sails. That’s a bold decision, but an easy one to make because he wasn’t actually going to lead the battle, being as how he was hurt. What boldness!

It worked out, because the Romans ended up mobile, the Carthaginians burdened.

About half of the Carthaginian fleet was either destroyed or captured. The rest were saved only by an abrupt change in the direction of the wind, allowing them to flee from the Romans.

END_OF_DOCUMENT_TOKEN_TO_BE_REPLACED

Ronald Reagan, in a March 8, 1983 speech to the National Association of Evangelicals in Orlando, called the Soviet Union an “evil empire”:

They preach the supremacy of the state, declare its omnipotence over individual man and predict its eventual domination of all peoples on the Earth. They are the focus of evil in the modern world….

So, in your discussions of the nuclear freeze proposals, I urge you to beware the temptation of pride, the temptation of blithely declaring yourselves above it all and label both sides equally at fault, to ignore the facts of history and the aggressive impulses of an evil empire, to simply call the arms race a giant misunderstanding and thereby remove yourself from the struggle between right and wrong and good and evil.

END_OF_DOCUMENT_TOKEN_TO_BE_REPLACED

Welcome to the [Redacted] Week in Review – I’m your HMFIC, Obscene Alex.  The NHL is back this week with one outdoor game, one indoor-outdoor game (it’s house-trained), and a big trade – and not a moment too soon because the withdrawal was making my hands shake.  Here’s what happened this past week: